A downloadable game for Windows, macOS, and Linux

"Long ago, about eleven years before a certain other story..."

In a small island nation known as the Mesec Kingdom, Prince Vestr's eighteenth birthday soon approaches. Coming of age means coming one step closer to his spot on the throne, but that is the least of his problems. Now that he is about to enter adulthood, his father and mother both push for him to marry Princess Lucetta of Rosaria, a person who he only sees as a friend from another country. As nice a girl she is, his interests lie elsewhere.

If only he were engaged to someone else, like her brother perhaps...

(This game is a prequel Mark of Lost Royalty, a game I made last year. While the two aren't strongly related plot-wise, I would suggest playing MOLR first.)

Vestr: The main character and the prince of the Mesec Kingdom. Flirtatious and lazy, he loves to tease people.

Ninoslav: Vestr's bodyguard, one of his favorite people to pick on. More often than not, he's grumpy about something. The most likely cause is the prince.

Lio: The Fifth King of Rosaria and Lucetta's older brother. A bit timid and soft-spoken, he tends to worry about things that most people would not.

Lucetta: Vestr's fiancee and the Princess of Rosaria. She's on friendly terms with Vestr, and doesn't seem to mind their arranged marriage. However, she seems to have something else on her mind...

Arlo: Lio and Lucetta's bodyguard and a young knight from Rosaria. He doesn't talk very much, but can be quite blunt.

Changeable Name for the MC

Image Gallery, 8 CGs in the demo and scene replay

Questions you don't have to answer, but I'd appreciate it if you did!

If it doesn't download right away, it's most likely because Chrome sees it as malicious and blocks it as a pop-up. Make sure you allow pop-ups from this site for the link to work.

This game was absolutely perfect! I love how much it focused on the characters and romance, and the writing was really solid. <3

1. I'm gonna have to say Nino. As much as I love shy boys like Lio, Nino's ending felt a lot more satisfying and fleshed out.
2. I haven't played the other game yet, sorry.
3. GOD YES! While I am quite happy with how the game ended and am not really sure how you could expand upon it too much, I'd still love to see some more chapters.
4. Haha, I think I'm a little late for this, but tumblr. It's just better suited for this kind of thing.
5. Nah, I think it's perfect as-is.

As of yesterday night, I had just completed this game, and I will say this game is absolutely outstanding! The GUI is beautiful and the storyline really knows how to pull the player in! As for the post game questions;

1. Nino. He is such a hardass in the begining, but I think that just gives him more charm and more personality! The way him and Vestr interact feels real and the developtment of the relationship is so fun to read!
2. I have sadly not, but by far of any other VN's I have played, this is truely the best! In my eyes its hard to match this story and characters!
3. I would love to! The game is very cute and does feel complete with how it is now, but if it did get updated for more chapters, I wouldn't complain!
4. I feel that it would be easier to have a Q&A on tumblr rather than Itch.io.
5. Honestly, I feel that this is perfect the way it is. The extra's after completeing the game as well are a good way to get the player more immeresed. By explaining more of the thought process of each characters design and personality, to the bigger story that you wouldn't have seen unless it was explained!

All in all, this game is truely amazing and i'll be sure to keep a watch on any other games you may post in the future!

I wanted to tell you that I really enjoyed your game and your narration and everything! I like your art and GUI best, by the way.

I like Ninoslav more than Lio, and of course, Vestr himself! Each character's personality is really unique and has their own distinct charms. I haven't played Lost Royalty before, but I WILL NOW! I think that the game is complete the way it is currently- I didn't even feel it was a demo. It's not so long, but not so short either. And umm... I don't know what to answer to your last questions, but I guess I'll support whatever you decide on.

Thanks and keep up the good work! 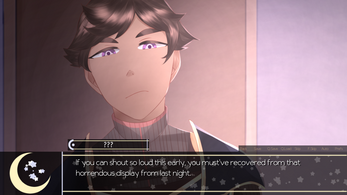 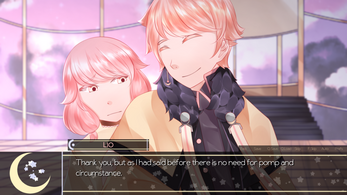 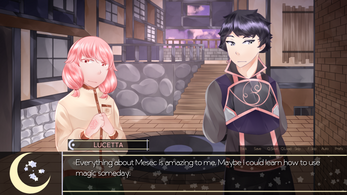